It goes without saying that the 19th century offered some compelling technologies and happenings in the way of the mattress, and the 20th century brought even more! Pocketed springs were introduced and patented by a Canadian, British-born, engineer named James Marshall (for those of you who aren’t in-the know, pocketed coils are primarily know as Marshall Coils – How “hanging” of Mr. Marshall!). Then came the invention of box springs, and again the mattress industry boomed! Box springs allowed for even distribution of weight across the mattress and acted as a shock absorber, both of which extended the life of the mattress. Bring on the year 1904, when Kingsdown opened their first mattress factory in NC, ensuring quick work of the construction of mattresses.

Between WWI and WWII, in the year 1926, Dunlop developed a manufacturing technology that turned vulcanized rubber sap into latex foam (definitely the “bee’s knees”!), and though these were initially used solely by British royalty, they later became more widely used in other countries around the world; even now pillows and mattresses are constructed using this same technology. By the 1930’s, pocket spring and innerspring mattresses, as well as upholstered foundations, became increasingly popular in Europe and North America (“Aces”!) and it was during this time that artificial mattress fillers also became the norm. Serta® came around in 1931, and though a tad later than its competitors, they caught up quickly – Now, how “humdinger” is that! The US in the 1940’s saw futon and air mattresses, the latter of which was also being constructed with vulcanized rubber, this time used to coat fabrics for making air mattresses offering a whole new look and feel to the bedding market. Then in the 1950’s, foam rubber mattresses and pillows were made available as alternatives to more traditional options during that time (What a “blast”!). 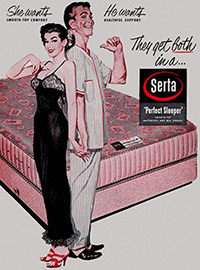 Bring on the 1960’s (“groovy, baby!”), when the modern waterbed was introduced, utilizing a new product known as vinyl; and adjustable beds which became prevalent during this decade as well. Vinyl was then used for the construction of air mattresses in the 1980’s (pretty “fresh”, huh?). Then in 1992 Tempur-Pedic® introduced a mattress made from memory foam that NASA originally created for the American Space program (It’s “all that and a bag of chips”!). And at the end of the 20th century, in 1999, the queen mattress size took the lead over the twin as the most popular sized mattress – Ever! - as consumers desired more room while sleeping (they’re “livin’ large!”). 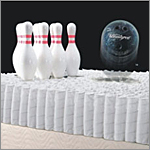 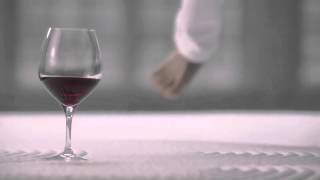 Finally, we’ve made it into the 21st century, when “comfort” and “choice” have become the two most important factors in choosing a mattress. In the year 2000, Simmons® set industry standards even higher with their invention of the “no-flip” mattress which, as you can imagine, took the bedding industry by storm and left other mattress companies struggling to catch up. Then in 2009, Serta® joined forces with Simmons® creating Serta Simmons Bedding, LLC. Tempur-Pedic® and Sealy® followed suit, announcing their plans to merge in 2012 forming “the world’s largest bedding company” (“totes cray”, right?)

These days, it seems that we have an almost incomprehensible range of mattresses to choose from. From the Stone Age with truly humble pads on floors in caves all the way to the 21st century, we have seen some incredibly innovative ideas come forth and the bedding industry evolve. The plethora of mattress options we have today offer levels of comfort and support that could only have been mere imaginings in centuries past. And the industry continues on still, with new technologies and processes, and cool designs and features, regularly rushing onto the market. And here in this busy world we live in, having countless mattress options to choose from can sometimes add to our already hectic lives. Don’t know where to begin, or what questions to ask? Give us a call at Mattress By Appointment and set up a time to come in and see us. You’ll sure to find the bed you’ve been dreaming of at a price you can afford!