Countless studies have been done all over the world about the benefits of sleep, and whether it’s a quick, 20-minute cat-nap or getting the recommended 9 hours of sleep at night, I’m sure we can all agree that sleeping is nothing short of awesome and we all wish we had more of it. In my research, I came across the different “alternative sleep cycles”, which up until recently I hadn’t even known existed! Now, I’ve decided to share what I’ve learned with you. So here we go!

To get a better understanding of each, let’s define them first: there’s monophasic which means that there is only one period of sleep in a 24-hour period; biphasic or segmented means there are two periods of sleep in a day, so sleeping through the night and a siesta during the day; triphasic of course means there are three sleeping periods over the course of a 24-hour day, i.e. sleeping through the night with two naps during the day; the Everyman Cycle has four periods, typically sleeping throughout the night with three 20 minute naps during the day; Dual Core is when you have two different sleeping periods during the night with a handful of naps during the day; Uberman is a bit more difficult than the previous schedules as it removes sleeping through the night entirely and replaces it with naps over the course of the day; then there’s Dymaxion which is even more difficult still as it involves sleeping four times a day for a mere 30 minutes each time; and lastly, there’s SPAMAYL which stands for Sleep Polyphasically As Much As You Like, and this sleep cycle involves no less than 7 naps a day and no more than 10; 85% of mammals are polyphasic sleepers meaning they sleep in portions throughout the day. Though there are technically eight sleep cycles altogether, I’d like to concentrate on the five most popular and most recognizable types of sleep schedules. 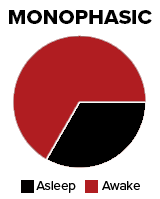 The Monophasic Cycle is the most common in the world, and the simplest, of the five sleep schedules and is the schedule most human adults follow. It consists of one sleep at night, typically between 7-9 hours and is generally the most convenient sleep cycle; it also allows more flexibility during sleeping/waking hours and minimizes the risk of sleep deprivation. Of course, as with all things, there are some cons associated with monophasic sleep and those are that this cycle requires a relatively large amount of sleep overall, it’s not at all convenient for people who work late shifts, and it doesn’t exactly allow for napping. The Monophasic Cycle is best suited to people who work regular hours (9-5, for example) or those whose schedule doesn’t allow for napping. 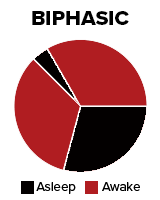 The Biphasic, or Segmented, Cycle is a split sleeping pattern, typically consisting of 5 to 6 hours of sleep a night with one nap around midday. A biphasic sleep cycle is believed to be the ideal sleeping pattern since it incorporates a napping period (I must say, I’m inclined to agree!). The pros of the biphasic cycle are an improvement in both memory and cognitive functions; it offers a boost for those who may be sleep-deprived; and, if taken regularly, this cycle can improve cardiovascular health and reduce overall stress. Of course, there are cons too, and those are that napping can perpetuate bad sleeping patterns affecting those who already have sleeping issues such as insomnia, and this sleep cycle can worsen other sleeping issues that are caused by jet lag, stress, and illness. The Biphasic Cycle is best suited to people who are living in areas where this cycle is common, i.e. Latin America, or those who don’t have trouble sleeping at night despite having napped during the day. 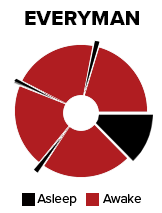 The Everyman Cycle typically consists of a 3.5-hour sleep overnight and three 20-minute naps throughout the day and is considered the most successful reduced-sleep schedules to date. The Everyman Cycle is more regimented and the amount and consistency of sleep matters much more than with the other cycles. As with all the other alternative sleep cycles, there are pros and cons. The pros are that this cycle allows for longer waking hours during the day; you get to nap, though for only 20 minutes each time; and it offers flexibility in napping once your body and mind become adapted to it. As for the cons, daytime napping is required, which some may not be fond of, and this cycle offers the minimal sleeping time of about 4.5 hours over the 24-hour period. The Everyman Cycle is best suited for people who don’t feel as though they’re cut out for Dymaxion or Uberman Cycles, and those who want to utilize polyphasic sleep to increase their waking hours. 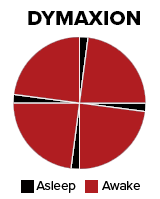 The Dymaxion Cycle consists of 4 30-minute naps throughout the day, completely omitting any sleep time during the night. (No way, José!) The pros to the Dymaxion Cycle are that it allows for the most waking hours of almost all the other cycles; your waking periods are 6 hours long; and it only requires four 30-minute naps a day. The cons are that the Dymaxion Sleep Cycle is the most difficult one to adapt to and the longer naps may be inconvenient for your schedule. The Dymaxion Cycle is best for people who don’t need much sleep and those who are considered “short sleepers”, which is defined as “someone who sleeps a lot less in a 24-hour period than is expected for people of the same age, without being abnormally sleepy. 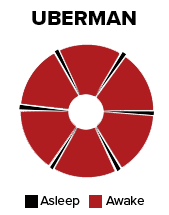 The last is the Uberman Cycle, and this consists of 6-8 20-minute naps during the day, with an equal amount of time in between. The pros are, supposedly, once you’re fully adapted, this cycle will enable you to fall asleep anywhere; it allows for the same number of waking hours as the Dymaxion Cycle, and the naps are only 20 minutes long. Just like the Dymaxion Cycle, this one is rather impractical and difficult to adapt to and is extremely inflexible in the way of sleeping/waking times. The Uberman Cycle is best for those who thrive on a rigid schedule and those who do not perform activities that require more than 3.5 hours.

No matter what cycle you sleep by, if you’re in the market for better sleep, and a better quality of life, for a price that can’t be beat, then contact your nearest Mattress By Appointment® today and schedule a time to come in and see us. Better sleep is just a call away!