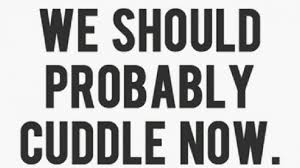 A couple of weeks ago, I had the pleasure of writing about the connection between sleeping positions and personality traits. It’s a fascinating topic - if you ask me - and I genuinely enjoyed the researching and writing involved. Hopefully you enjoyed it as much as I, and hopefully you learned something too! During my research, it occurred to me that it’d be just as interesting, and just as much fun, to write about the correlation between sleeping positions and the status of your personal relationship(s). So, on that note... did you know that your sleeping position with your partner can also tell you a great deal? According to some studies, it’s true. Hang on tight and we’ll get down to it!

Most body language stems from the limbic brain which is more primitive than the cognitive part of the brain. Body language can reveal the genuine thoughts and feelings of a person usually even better than words. When we sleep, we are our most authentic and vulnerable selves and, because of this, our sleeping positions can reveal information that we may otherwise keep hidden. For instance, stomach sleepers are more likely to be open and affable, even playful at times, and back sleepers are generally considered more the strong and silent type. Now, take all these different sleeping positions, and personalities, and put them in one bed, then... Imagine the possibilities!

Our subconscious takes the lead when we sleep and your body language with your partner can be a good indication of how your relationship is going overall. “Even if you can’t or don’t articulate those things while you’re awake,” says Patti Wood , a body language expert who possesses more than 30 years’ experience. Several other experts and psychologists, who have conducted studies and written books on the subject, agree. These experts have discovered the ten most popular sleeping positions for couples and the secrets they reveal are compelling... 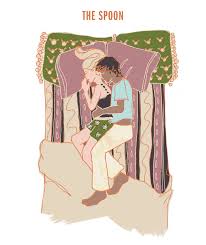 This is the most common position for all couples, particularly those who have been together for 3-5 years. Samuel Dunkell, a New York-based psychiatrist with 20 plus years' experience says, “When a woman assumes the posterior position, it may indicate that she is the more giving partner or that her partner needs special nurturing.” If you’re the little spoon, your partner envelops you in a way that feels intimate and secure, and allowing them to hold you in this way lends to feelings of trust; alternatively, if you’re the big spoon, you’re more of the protector in your relationship.

According to a study completed by Corrine Sweet , a relationship psychologist, this position is only used by a fifth (or 18 percent) of couples and exhibits a dynamic in which one partner takes a protective stance over the other”. Definitely a sweet and saucy position to be in, “It’s a very vulnerable position that may be considered sexual, but also says, ‘I trust you’”, says Wood. 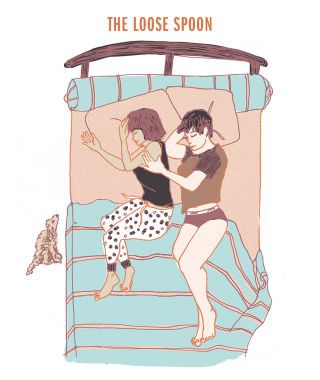 The Loose Spoon – “I’ve got your back”

Newer couples usually have more physical contact in bed, but once the honeymoon phase is over, the novelty of sharing everything, especially a mattress, can wear off. This position can become routine for couples who enjoy spooning but still want quality sleep, according to Paul Rosenblatt, author of Two in a Bed: The Social System of Couple Bed Sharing . This is similar to the big spoon saying, “I’ve got your back, you can count on me,” but isn’t as sexual as spooning closer, says Woods. 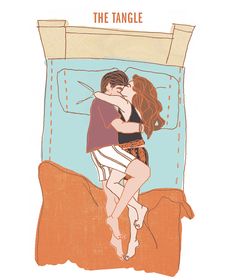 The Tangle – “I can’t get enough of you”

Rarer than The Spoon, this position tends to be used when there are heightened emotions involved (like after lovemaking) or at the beginning of a romantic relationship. Usually this is a sign that you can’t get enough of each other – even when you're sleeping. “It means your lives are intertwined, that you function as a pair. You probably finish each other’s sentences and take care of each other,” says Wood.

Some couples maintain this sleeping position throughout their relationship but, according to  Elizabeth Flynn Campbell, a New York-based psychotherapist with over 25 years’ experience, it’s not necessarily a good thing. Flynn-Campbell says, “[the couple] could be overly enmeshed, too dependent on each other to sleep apart.” The Liberty Lovers – “I need space”

This position is not as cut and dry as the others, and by that, I mean that there are differing interpretations. If you and your partner sleep facing in opposing directions with space between you this could indicate that there is a desire to be more independent of one another – of course, this depends on whether you and your partner ordinarily snuggle. If you do, this could be a red flag. However, according to a marriage study conducted by Corrine Sweet, couples who sleep back-to-back without touching are “connected and secure in themselves [and with each other]. This position shows both closeness and independence in a relationship.”

That being said, many people start out snuggling, either to show affection or for warmth, then move towards opposite sides of the bed for a myriad of reasons – perhaps you’ve gotten too warm, or maybe your partner moves around a lot, according to Rosenblatt. In addition, some couples actually flourish when they stop trying to force themselves to snuggle throughout the night – undoubtedly because having some room to move around can help you to sleep more soundly overall, enhancing your quality of sleep. 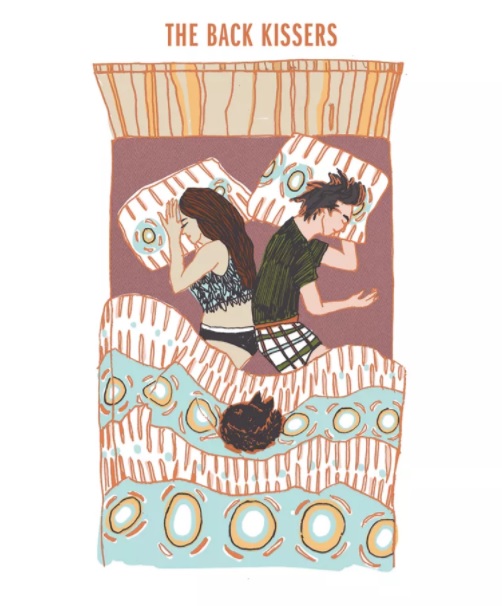 The Back Kissers – “I need space – but not from you”

If you and your partner sleep back-to-back with your backsides touching, this typically means that you’re comfortable and confident in your relationship. According to a study conducted by Wood, facing away from one another lends to the desire to be independent, while still being connected. In other words, it’s likely that your relationship is more interdependent (which is considered the ideal middle ground for relationships in general). 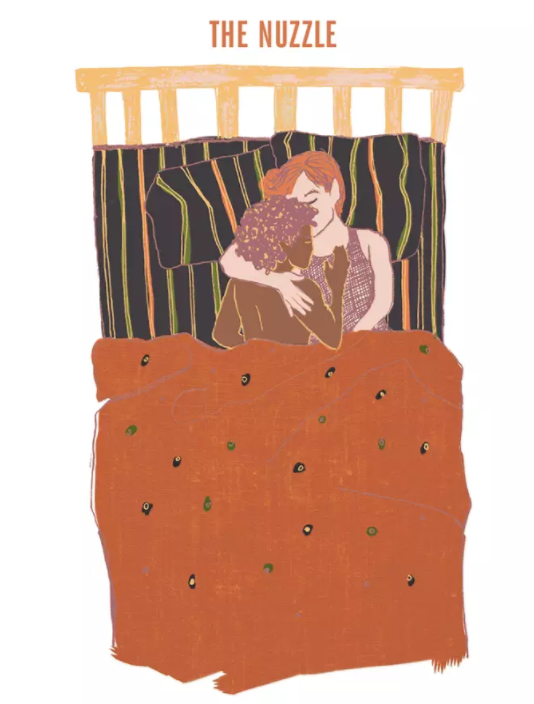 The Nuzzle – “I depend on you”

This is one of the sweetest positions, in my opinion anyway. This position is when one partner rests their head on the other’s chest, with their legs intertwined. It says, “I’m powerful and I want to use that power to protect you,” says Woods. This is a nurturing position that creates a feeling of protection and shows that you depend on your partner.

According to Shirley Glass, a psychologist and marital therapist, “there’s a high level of trust here,” as this snuggly position has a “strengthening sense of comradeship and protection.”

“If you sleep with your head on his chest and the rest of your body is sprawled out, this sends the message that you still want to make your own decisions”, says Woods. 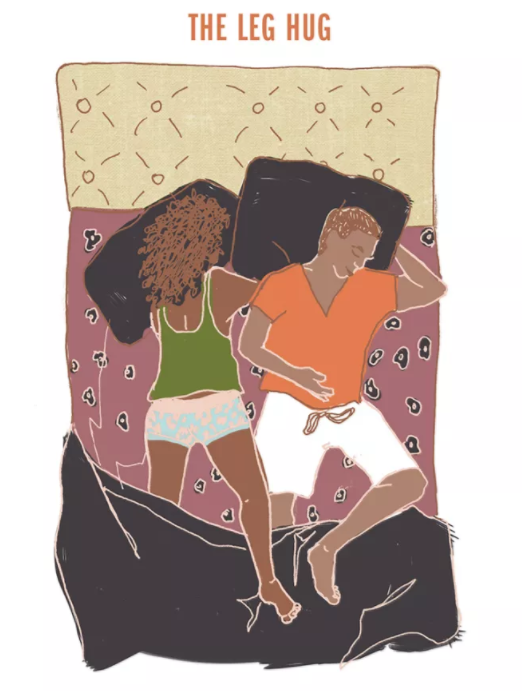 The Leg Hug – “I need attention”

Woods states that if your partner plays footsie with you in bed, or intertwines their legs with yours, it means they’re craving connection. Being furthest from the brain, and the first part of your body to respond in a ‘fight or flight’ situation, the feet are considered the ‘most honest’ part of the body, and under the least conscious control.

On the flip side, a pair of tangled legs can also signify that the two of you can’t get enough of each other – even while sleeping. “It means your lives are so intertwined that you function as a pair. You probably finish each other’s sentences and take care of one another,” says Wood. 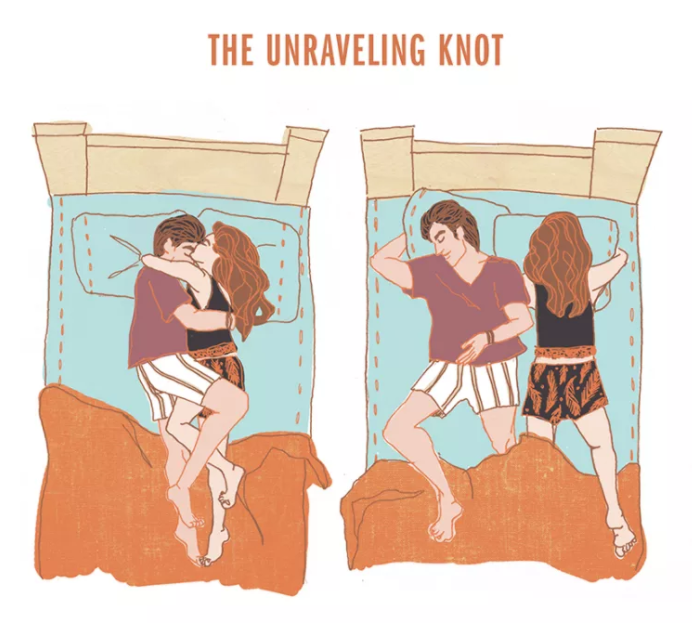 The Unraveling Knot – “We compromise”

This position begins with The Tangle position, and transitions to an ‘unraveling’ of sorts.

Surprisingly, this position is considered a sign of a stronger relationship than The Tangle. Dr. Sweet states, “[This is] a compromise between intimacy and independence, allowing for the best of both worlds.” 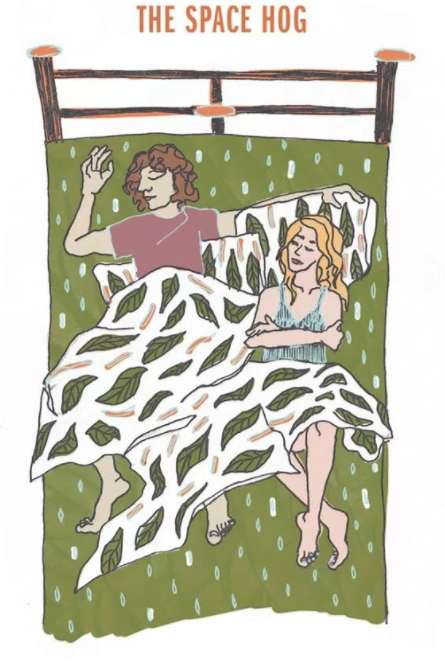 If your partner tends to sprawl out taking up most of the bed, this could mean that they’re selfish – especially if they’re pushing you off the bed! People who sleep closer to the headboard are usually more dominant and confident overall, while those who sleep further away from the headboard tend to be more subservient and [may] have lower self-esteem, says Wood.

If this is happening, it may be time for an honest conversation about your relationship. According to Sweet, “one partner dominates the space, while the other takes a secondary role”. You can also tell who is dominant in the relationship based on where their heads lie when they sleep. Couples who sleep at the same level are on the same page and equal, and it’s even better if their heads are touching – it indicates that they are like-minded and know what the other is thinking, says Wood.

Another interesting little tidbit? Research indicates that the longevity of a marriage is enhanced when couples fall asleep and awake at the same time. These same studies prove that couples who go to bed and get up together are more content in their relationships overall – with 30 percent of those surveyed who have differing sleep/wake times complaining of a troubled relationship . Of course, keep in mind that every relationship naturally ebbs and flows.

There are a great many things you can learn by reading body language, if you’re paying attention.